OBD-1 ECU’s I support for Reprogramming 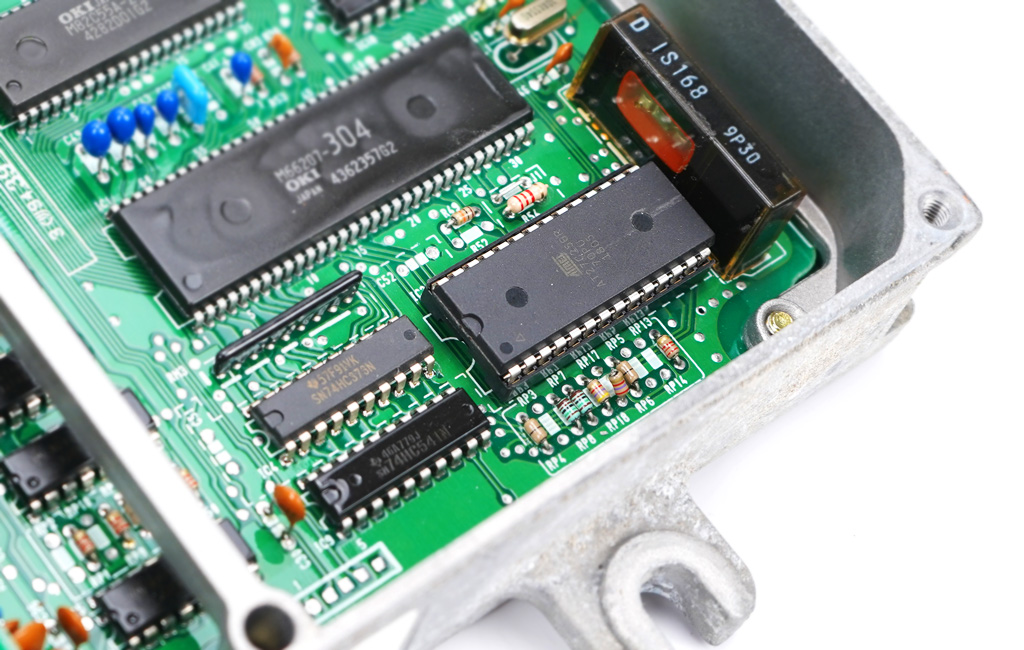 This service consist of socketing your ECU and ‘burning’ a custom map (program) to an ATMEL OTP EPROM. “OTP” is One-Time-Program; once programmed it cannot be erased. The socket makes it easy for future EPROM chip swap-outs, say you want to run a different program for instance. In the old days, EPROM chips would be soldered straight to the mainboard!

I do have several NON-VTEC programs for SOHC + DOHC applications. Inquire within with your details.

Fee: $25 for stand alone conversion or $145 if included as part of a full ECU chip job. This price includes return ship fees.

I can convert USDM NON-VTEC Civic & Integra ECU’s into VTEC ECU’s, essentially making it into a P28 ECU. The knock sensor is unsupported with this conversion. The Civic VX P07 ECU with a 1560 board is unsupported. The P05 Civic CX ECU in stock form supports a 1-wire 02 sensor but will be updated to support a 4-wire 02 sensor as part of the conversion.

Auto ECU’s can be converted for manual use eradicating the annoying check engine code 19. This is supported for Civic, Integra, and Prelude OBD-1 ECU’s. This conversion works for stock ECU’s too meaning it does not need a re-programming job to become a manual ECU.

Fee: $65 for bench testing any reported issues + includes replacing all capacitors and IC17 chip.
$15 for replacing burned Q31. All fees include return ship fees for US customers.

Part of aging OBD1 ECU’s (Civic/Integra ECU’s specifically) are the onboard capacitors going bad as well as the IC17 chip.  Capacitors are the little round brown vertical standing cylinders sporadically placed around the main PCB. They can leak with varying degrees of staining the PCB or having teal colored fuzz build up on their butts and legs.  They can also emit a fishy-like smell if you give them a close whiff. The IC17 chip works in conjunction with some of these Caps, specifically fuel pump related Caps. IC17 doesn’t show any signs of wear & tear (no burning or leaking).  In rare-rare cases, Caps + IC17 are sometimes not the issue affecting fuel pump operations, but most of the time they are.

If you’re experiencing any of the following symptoms, you more than likely have Capacitors and/or IC17 going bad:

A burned “Q31” resistor can happen when the IAT and Evap Purge Solenoid (EPS) are plugged incorrectly to each other. They share the same kind of 2-wire round connector, so its easy to cross them by accident when performing an engine swap in a 92-95 Civic and 94-95 Integra. The end result is Q31 eventually burning itself out and the IAT sensor tip melting. You may or may not get a check engine light (CEL) for the IAT but there is no CEL for the EPS, so its kind of hard to pinpoint. Easiest way is to make sure you have these two connectors installed properly (1) by noting their wire colors to their respective sensor or (2) simply marking/tagging the wires before the engine swap is performed. Sometimes Q31 can get so burnt up it damages the main board. When this happens I cannot repair the board only remove the remnants of Q31. Having Q31 completely removed doesn’t hurt anything either but it may affect emissions since the EPS is an emissions related sensor.